“Everything was green. Mulally thought that was odd for a company losing billions.” 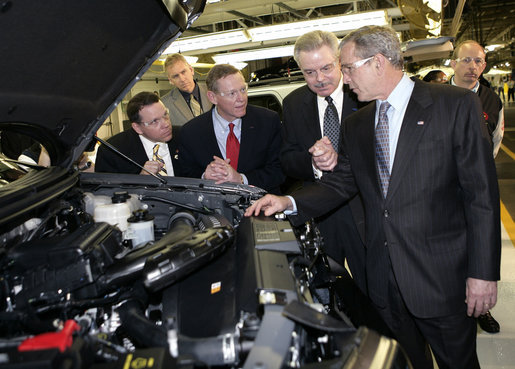 I have been a fan of the Ford Motor Company ever since I was a boy. There’s no rational reason for it, but then again, experts tell us that brand preferences are formed at very early ages. Somewhere around the age of 10 or so I decided I liked Ford cars. My first car after college was a 1993 Ford Taurus, which I later gave to my sister when I moved overseas. My second car was a 1998 Ford Contour. I changed to a nice little Honda Civic five years ago; at the time, the domestics weren’t looking so great. But I still have a certain patriotic wistfulness about Fords, and probably always will have. For this reason, I’ve been watching Ford’s recovery with interest.

Most people know that Ford didn’t take a dime in government money during the Great Recession. It was the only one of the Big Three automakers that did not. Much of the credit for this belongs to Alan Mulally, the CEO of Ford. He made the gutsy and prescient decision to take out a $23 billion loan two years before the recession hit. He used absolutely everything as collateral to get it, including the iconic blue oval logo. Since that time, Ford sold off its troubled and de-focusing Jaguar, Volvo and Aston-Martin luxury brands, built a terrific new line of fuel-efficient cars, whittled the number of cars “platforms” it used globally down to just a few, and steadily increased its car quality.

Ford’s near-death experience – and subsequent rejuvenation – have been the subject of many case studies. A good short one, and the impetus for this post, is “An Insider’s View of the Ford Story” from the Ross School of Business at the University of Michigan. In it, Ford COO Mark Fields tells a wonderful anecdote that most of us can relate to:

At a weekly business status meeting early in Mulally’s tenure, charts from top executives didn’t indicate the company was in any trouble. Ford uses a color code for topics — green for good, yellow for a potential issue, red for a problem — and everything was green. Mulally thought that odd for a company losing billions.

Meanwhile Fields, then president of the Americas, had an issue with a product launch that year. The new Edge had a liftgate problem that threatened to delay its critical debut.

Finally it was Fields’ turn — Edge launch: bright red. “I could feel the chairs move away from the table,” said Fields. “I said we have a problem, and I’d love to have help from manufacturing and quality to help resolve it. Alan turns to me and starts clapping. The next week, everybody’s chart was like a rainbow.

By all accounts, Alan Mulally is a no-BS guy who does not fear hearing bad news. Indeed, everything I’ve read suggests that he encourages his staff to bring problems to the surface so that they can be discussed dispassionately and dealt with. Crucially, he encourages his team to do this without finger-pointing. At Ford, this has helped break through the factionalism that had traditionally plagued the company. As Fields puts it, “Working together has been so crucial for us to get through a very difficult time and work through our issues on our own.”

As described in an older CNN Money story, establishing trust and a culture of openness was a big change. But there’s no doubt that the ultimate referee is Mulally:

There are no pre-meetings or briefing books. “They don’t bring their big books anymore because I’m not going to grind them with as many questions as I can to humiliate them,” Mulally says. “We’ll see them next week. We don’t take action - I’m going to see you next week.” No BlackBerrys are allowed, and no side conversations either - Mulally is insistent about that. “If somebody starts to talk or they don’t respect each other, the meeting just stops. They know I’ve removed vice presidents because they couldn’t stop talking because they thought they were so damn important.”

Ford’s success isn’t solely due to the leadership qualities of the CEO, of course. Building better quality cars, after all, is the point of the whole exercise. That, the company has done well. But I love this story because it shows how setting the “tone at the top” matters, and that having a positive culture of problem-solving can (literally) pay dividends all around.

I’m Andrew Jaquith, a Managing Director in financial services. I have worked for JP Morgan Chase and Goldman Sachs. Previously, I was CTO SilverSky, and former analyst with Forrester and Yankee Group. My interests include security and risk, anything data-related, app development, visualization, good writing and spirited discussion.
Bully for BlackBerry. But Is It Too Late?
Cybersecurity for Machine-to-Machine (M2M) Networks