And So It Begins, With Small Saturated Spots 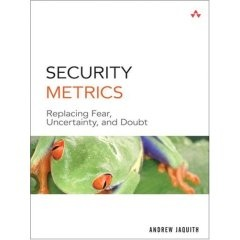 My publisher, Addison-Wesley, has recently updated the information on my book, Security Metrics: Replacing Fear, Uncertainty and Doubt on Amazon. Although I am particularly fond of the inside contents, I am also very pleased with the way the cover came out. AW’s very talented Alan Clement put this great picture on the cover:

Isn’t it nice? I like it not just because it’s a great picture, but because it ties into the book’s overall theme. Allow me to explain.

I am highly visual person. I have always believed that when you want to make a point, particularly to executives, you need to deliver it in a way that drives it home forcefully and clearly. Accompanying numbers with clear, crisp, honest graphics is an important way of doing this.

The great Edward Tufte, arguably the most influential information designer of the last 25 years, contends that the strategic application of small, saturated points of color in exhibits can draw attention to key points. His tastes run exactly opposite to the mainstream, as evidenced by many exhibits I see from reputable vendors. Most people’s idea of a “slick exhibit” means three-dimensional bar charts clad in radioactive colors. But instead of drenching entire exhibits with leftover Sherwin Williams inventory, Tufte argues that in many cases exhibits should be relatively austere, save for those few key spots where you want to make your point. That is where you bust out the saturated color. In short, Tufte argues that restraint should rule. As a raging contrarian and visually driven person, I agree wholeheartedly.

Which brings me back to my book’s cover. In the book itself, I have exercised fairly tight control over the presentation format of the exhibits, of which there are about 75. But the cover is something else again. My publisher wanted, for obvious reasons, to apply a common style to the cover that aligns it in with its other professional books. And of course I was happy to work with them on this. So when it came time to consider designs, AW described the overall aesthetic, and asked me for some general guidelines about cover art.

AW’s professional books generally have a wildlife motif. I suggested that we look for an animal who camouflages itself or blends in with the natural surroundings, but also has some kind of small, dense, saturated marking or plumage. Alan sent me a dozen samples, which included tropical forests with wildly colored birds, an Arctic wolf in a snowstorm with shining yellow eyes, a tree owl with red eyes, a snake with unique markings, and several others. But the frog that you see above was far and away the most appealing. It was Alan’s favorite, too.

Colors, security, metrics, outlier analysis, and book design — who knew they were all so related?

I’m Andrew Jaquith, a Managing Director in financial services. I have worked for JP Morgan Chase and Goldman Sachs. Previously, I was CTO SilverSky, and former analyst with Forrester and Yankee Group. My interests include security and risk, anything data-related, app development, visualization, good writing and spirited discussion.
SSL is a Concrete Sewer Pipe
Ryan, Joe, Joanna, and the “Serious Hole” in Vista’s UAC